this page is under construction …

Many – not all – GEM make use of worm gears for axis moving. During my investigations on my GP-D2 I had to make myself clear about their characteristics. The crucial factor is the gear backlash. Following discussion groups it reveals that’s not always clear what type of backlash is being talked about. Here I try my share the results of my investigations. Of course they’re not really challenging but worth to know. 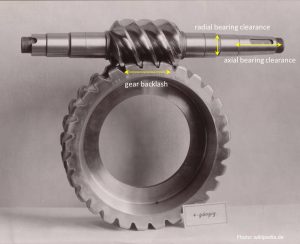 The picture shows a toothed gear and a worm. In the worm gear these parts transmit the force. Other not shown parts are the bearings for the worm shaft and the gear. Looking at the types of backlash one has to distiguish between the gear backlash and the bearing clearance of the worm (axial and radial). All three effects result in similar effects on the behaviour of the GEM.

Similar the effects can be mostly suppressed for the DE-axis putting a slight imbalance on the axis. But at the DE-axis additionally a reversal of direction comes to play. This is not an issue for an unbalanced gear backlash, but for the shaft clearances!

In my case the the floppy bearings of the worm shaft caused the trouble. In the case of a dirction reversal shaft moved in way which led the telescope move in the opposite direction as intended for the first hundreds milliseconds of a guiding pulse.

The picture shows some basic thoughts on tolerances regarding a worm gear of a Vixen GP. It should also be applicable for many clones. With that type of GEMs one arc second corresponds to 1 / 10000 mm at the worm!